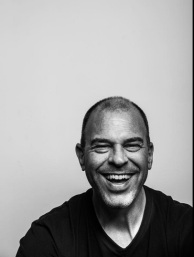 Steve Bormes is a Sioux Falls artist making waves with his concocted sea creatures who inhabit the new “aquarium” at the South Dakota Art Museum. The Deep Sea Imaginarium exhibition recently opened in Brookings. It’s an extension of the show, which spent a year at the Washington Pavilion’s Visual Arts Center, but about 50 percent of the work is new.

“I’m really excited about a couple of the pieces… one called ‘Yah Mon-atee’ is keeping me awake nights.  And there’s a giant sea anemone that looks like a mushroom, that… well, I don’t want to give it ALL away.  Suffice to say, I think it’s going to be a fun show!” – Bormes

A man with a diverse background, Bormes has long had a do-it-yourself ethic when it comes to making and tinkering and it is that ethic, rather than art school training, that led to the sculptural practice of this self-taught artist. When Bormes and his wife, Tove, opened Rug & Relic Inc. in Sioux Falls in 2004, he started using odds and ends he would find on his purchasing expeditions to Turkey to make lamps to sell in their shop. Having now unleashed the artist within, he spends much of his time out hunting for parts for his sculptures or putting them together in his studio space behind Rug & Relic.

“My last art class was in about 8th grade, and my degree in biology and math didn’t exactly have an art-focus, either.  However, I’ve found ways to be creative, on some level, for most of my life.  I even hold patents on Christmas decorations I created when I was trimming trees for a living!  But Liz Bashore-Heeren is the one who told me I was, perhaps, a “real” artist, and I should start looking at my work that way.  Her words were a game-changer for me, and my art continues to evolve…” said Bormes.

Bormes has also had sculpture pieces in various sculpture walks.

“I really love working on pieces for these outside venues, as the scale of things can be so much bigger! I’m hoping to jury in again to Sioux Falls and Mankato sculpture walks, and perhaps expand to include a couple more sculpture walks in the Midwest.”

Bormes was awarded a South Dakota Arts Council Fellowship in 2015.

“I work hard every day, and being awarded that fellowship was sort of like the arts community patting me on the back, and saying ‘keep on, keeping on…’  When people put their faith in me, I am accountable to them, and it drives me to do more, to create new things, to do the best work I can.”

More of Bormes’ work can be seen at: